THE FILM WILL PREMIERE IN SEPTEMBER.
Friday, September 20, 2019 in North America and September 13, 2019 internationally. 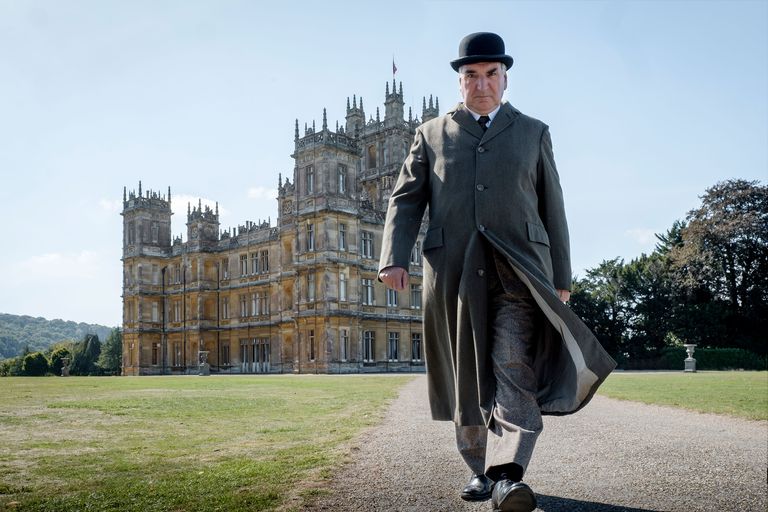 Everything We Know so Far About the Downton Abbey Movie
From the latest casting news to the premiere date.

After months—nay, years of rumors—it's finally official: Downton Abbeyis heading to the big screen. (We'll pause a moment while you let that news sink in.)

"Since the series ended, fans of Downton have long been waiting for the Crawley family’s next chapter," Focus chairman Peter Kujawski said in a statement in early July 2018. "We’re thrilled to join this incredible group of filmmakers, actors and craftspeople, led by Julian Fellowes and Gareth Neame, in bringing back the world of Downton to the big screen."

Here's everything we know so far about the project:

THE FIRST TRAILER IS FINALLY HERE.
Watch it above.

AND SO ARE THE FILM'S OFFICIAL POSTERS.
Each one features a different character—Mary, Edith, Andy, and Barrow—but they all say "We've been expecting you."


FOCUS FEATURES
THE FIRST STILLS FROM THE MOVIE HAVE BEEN RELEASED AS WELL.
See the first images from project, photos of Lady Mary, Lady Edith, Lord Grantham, Mr. Carson, and the Dowager Countess, below:


THE STORY WILL PICK UP IN THE FALL OF 1927.
The film will center around a royal visit of King George V and Queen Mary to Downton. (That would be Queen Elizabeth's grandparents.) Here's what else we know:

Joanne Froggatt, who plays Lady Mary's long-suffering maid, Anna, teased that her character is finally in a "good place" in the film. "She and Mr Bates have a baby boy, now 18 months old," she said, also revealing that there will be "romance, fun, surprises, sadness and intrigue."

There's even a little romance. “Given the fact that he is one of the only ones left who hasn’t found love, one would hope and assume there is an opportunity for him to have an iota of a chance at finding something,” Leech told Entertainment Weekly.

According to Michelle Dockery, for her part, Lady Mary is "settled" in the film. “What you see is her for once being settled,” Dockery says. “[She and her second husband Henry Talbot are] very supportive of one another and they’re good friends. It’s nice to see Mary in that way as opposed to being in constant turmoil about her love life.”

Talbot, however, won't have a major role in the film. Matthew Goode, who plays Henry Talbot, said "I'm just popping in at the end, which is a nice way to do it."

Go Behind the Scenes of the Downton Abbey Film
Elizabeth McGovern spoke a bit about the tone of the film with Town & Country, but she kept the plot details light.

"I feel like the movie looks at all the characters with a really affectionate lens. In the way it’s written, there’s almost a nostalgia for all the characters," she said. "And I felt that myself, seeing everybody again in the costumes, and the things that they would say, hearing them again. It was a really nice little gift to be able to participate in it."

Laura Carmichael, who plays Lady Edith, was equally tight lipped about the storyline in a conversation at the TCAs, though she did tease, "I think everyone will be pleased. We've upped the ante, it's like turned the volume up."

THEY'VE WRAPPED FILMING.
In late November, the official Downton Abbey Twitter account shared a behind-the-scenes video of the movie being filmed, along with the caption, "143 unforgettable scenes, 50 wonderful days, 1 glorious film. #DowntonAbbeyFilm. It's a wrap!"

MAGGIE SMITH WILL BE COMING BACK.
The news of Smith's return to the story comes as something of a surprise. She hasn't been so thrilled about continuing the Crawley story in the past. When asked on the Graham Norton Show if she was glad the show was over, Maggie Smith said, "Oh yeah."

"By the time we finished, [The Dowager Countess] must have been about 110. It couldn’t go on and on, it just didn’t make sense," she continued.

"I just think it's squeezing it dry, do you know what I mean?" she said during a 2017 interview with the British Film Institute. "I don't know what it could possibly be. It was so meandering, what would you [do]? Anyway that's not my problem."

She will reunite with her former Harry Potter co-star Imelda Staunton, who played Dolores Umbridge, on set. Staunton is one of the new faces coming to Downton in the film. Other additions to the cast include Geraldine James (Anne with an E, Beast), Simon Jones (The Hitchhikers Guide to the Galaxy, Brideshead Revisited), David Haig (Killing Eve, Penny Dreadful), Tuppence Middleton (War and Peace, The Imitation Game), Kate Phillips (Peaky Blinders, The Crown) and Stephen Campbell Moore (History Boys, Lark Rise to Candleford). In late September, it was also confirmed by Deadline that Max Brown would appear in the production.

BUT THERE ARE A FEW FACES WHO AREN'T COMING BACK.
Sadly, there are at least two TV cast member who will not appear in the adaptation. Actress Lily James, who played Lady Rose in the latter seasons of the show, has confirmed that she will not appear in the movie. “My character Rose moved off to New York, so it would be farfetched to bring her back,” she told People.

“I would have loved to have come back for a scene, but for a movie, it can’t be like a Christmas special and it needs to be a focused storyline,” she said. “There was no space for Rose.”

Ed Speelers, who played the ambitious footman Jimmy in the latter seasons of the show, will also be missing from the film. When asked about the film in a recent interview for Town & Country, he said, "I haven’t got a Scooby Doo about that. I’ve got friends in it, but no, I don’t know anything about it. I’m sure it’ll be lovely."

DESPITE THE RUMORS, COUSIN MATTHEW WON'T MAKE A SURPRISE APPEARANCE.
Cousin Matthew Crawley was tragically killed off when actor Dan Stevens left the show, but he teased a potential comeback on Instagram last year. Stevens posted the picture below on his Instagram account along with the caption, "Should Matthew have a mustache for the #DowntonAbbeyMovie...? Vote below...