Yo no entiendo nada, la verdad. 1 DECEMBER, 2014 - 22:09 APRILHOLLOWAY
Largest known megalithic block from antiquity revealed at Baalbek
A new analysis conducted by the German Archaeological Institute at the ancient stone quarry of Baalbek/Ancient Heliopolis, in Lebanon, has calculated the size and weight of an enormous monolith, and can now conclude that it is the largest known stone block ever carved by human hands.

Located at an altitude of approximately 1,170 meters in the Beqaa valley, Baalbek is known to have been settled from at least 7,000 BC, with almost continual settlement of the Tell under the Temple of Jupiter, which was a temple since the pre-Hellenistic era. However, some researchers, such as Graham Hancock, argue that its roots go back as many as 12,000 years. During the period of Roman rule, Baalbek was known as Heliopolis (“City of the Sun”), and housed one of the largest and grandest sanctuaries in the empire. Layout of the temple complex at Baalbek. (Wikipedia)

One of the most awe-inspiring features of Baalbek are the incredible megalithic foundations of the Temple of Jupiter. The temple was built on platform of stones that are among the largest building blocks seen in the whole world. Twenty-seven of these enormous limestone blocks can be seen at its base with three of them, weighing about 1,000 tons each, known as the “Trilithon.”

How they were cut so finely and moved into place has defied explanation, particularly considering the blocks are known to have weighed over 1000 tons. Many researchers, Graham Hancock included, reject the traditional explanation that the blocks are the work of the Romans. Indeed, a quick glance at the photograph below clearly shows a difference in style and appearance between the large megalithic stones and the surrounding blocks used to build the temple.

“I do not agree with the mainstream archaeological view that any of the three megalithic blocks in the quarry, or the enigmatic megalithic foundations of the Temple of the Jupiter, are the work of the Romans,” writes Graham Hancock. “I believe these huge megaliths long predate the construction of the Temple of Jupiter and are likely to be 12,000 or more years old -- contemporaneous with the megalithic site of Gobekli Tepe in Turkey. I suggest we are looking at the handiwork of the survivors of a lost civilisation, that the Romans built their Temple of Jupiter on a pre-existing, 12,000-years-old megalithic foundation.” Quarry of megalithic blocks
The gigantic blocks used in the foundations of the Temple of Jupiter are known to have come from a nearby quarry located around 800 meters (2,600 ft) from the temple. The limestone quarry houses two massive building blocks that never made it to the temple – one weighing about 1,240 tons, and the other, known as the “Hajjar al-Hibla,” or The Stone of the Pregnant Woman, weighs about 1000 tons.

Archaeologists believe the Hajjar al-Hibla monolith was left in the quarry, because the stone quality of a block’s edge proved to be poor and the monolith could easily be damaged during transport.

The Stone of the Pregnant Woman at Baalbek (Wikipedia)

According to Discovery News, the German archaeological team have now found a third building block next to the Hajjar al-Hibla stone and underneath it. Still partially buried, the monolith measures measures 19.6 meters (64 feet) in length, 6 meters (19.6 feet) in width, and at least 5.5 meters (18 feet) in height. Its weight has been estimated at 1,650 tons, making it the largest known stone block from antiquity.

“The level of smoothness indicate the block was meant to be transported and used without being cut,” the German Archaeological Institute said in a statement.

Further excavations will attempt to establish whether the newly-discovered block suffered from the same problem as the Hajjar al-Hibla stone, resulting in its abandonment in the quarry. Lithograph by D. Leopoldo Mueller from the Spanish 1851 Edition of Peruvian Antiquities

Rivero and Tschudi in Peruvian Antiquities (1851 Spanish, 1853 English) argue that the protagonists of the artificial cranial deformation hypothesis are mistaken, since they had only considered the skulls of adults. In other words, the hypothesis fails to take into account the skulls of infants and, most importantly, foetuses which had similar elongated skull shape. It is worth quoting Rivero and Tschudi: “We ourselves have observed the same fact [of the absence of signs of artificial pressure – IG] in many mummies of children of tender age, who, although they had cloths about them, were yet without any vestige or appearance of pressure of the cranium. More still: the same formation of the head presents itself in children yet unborn; and of this truth we have had convincing proof in the sight of a foetus, enclosed in the womb of a mummy of a pregnant woman, which we found in a cave of Huichay, two leagues from Tarma, and which is, at this moment, in our collection [my emphasis – IG]. Professor D’Outrepont, of great Celebrity in the department of obstetrics, has assured us that the foetus is one of seven months’ age. It belongs, according to a very clearly defined formation of the cranium, to the tribe of the Huancas. We present the reader with a drawing of this conclusive and interesting proof in opposition to the advocates of mechanical action as the sole and exclusive cause of the phrenological [i.e. cranial – no negative connotation at that time - IG] form of the Peruvian race. The same proof is to be found in another mummy which exists in the museum of Lima, under the direction of Don M. E. de Rivero.
A 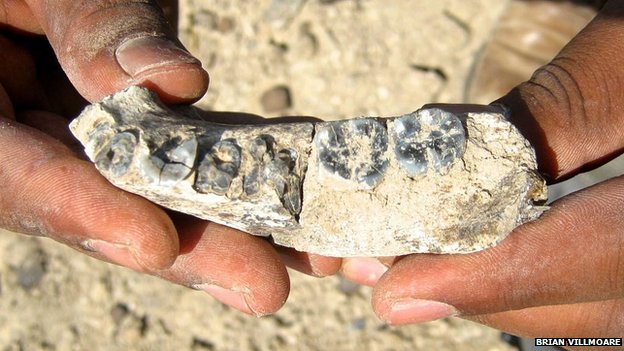 The fossil's teeth are smaller than those of other human relatives
Continue reading the main story
Related Stories
Scientists have unearthed the jawbone of what they claim is one of the very first humans.

The 2.8 million-year-old specimen is 400,000 years older than researchers thought that our kind first emerged.

The discovery in Ethiopia suggests climate change spurred the transition from tree dweller to upright walker.

The head of the research team told BBC News that the find gives the first insight into "the most important transitions in human evolution".

Prof Brian Villmoare of the University of Nevada in Las Vegas said the discovery makes a clear link between an iconic 3.2 million-year-old hominin (human-like primate) discovered in the same area in 1974, called "Lucy".

Could Lucy's kind - which belonged to the species Australopithecus afarensis - have evolved into the very first primitive humans?

"That's what we are arguing," said Prof Villmoare.

But the fossil record between the time period when Lucy and her kin were alive and the emergence of Homo erectus (with its relatively large brain and humanlike body proportions) two million years ago is sparse.

Flooded Kingdoms Of The Ice Age

20 SEPTEMBER, 2015
"More than a dozen mysterious carved discs found near Volgograd, Russia
A team of investigators in Russia have found more than a dozen stone discs in the Volgograd region of Russia including one measuring four-meters in diameter. The team claims that the discs contain tungsten, a high density metal that has applications in military technology. The nature of the discs remain a mystery."

"Earlier this year, another disc-shaped stone object was discovered in Russia by a coal mining company, this time in Siberia’s Kuznetsk Basin. The strange relic was found 40 meters underground, which suggests it is quite old. Archaeologists who examined the stone disc, which is perfectly circular with a diameter of 1.2 meters, stated that it was man-made." 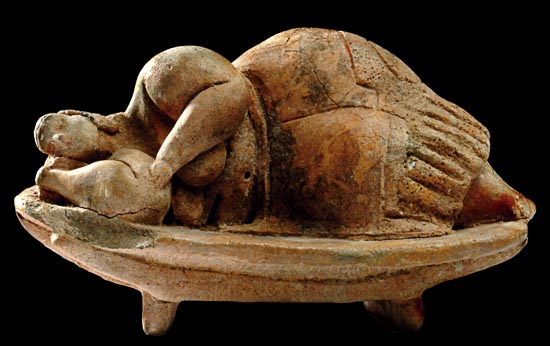