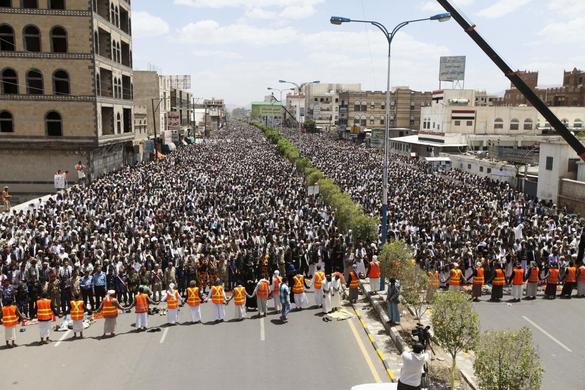 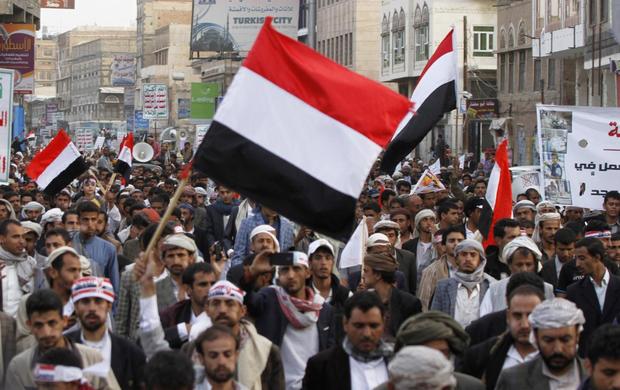 President sends more US troops into Iraq and promises arms and training for Syria's rebels in White House speech
http://www.telegraph.co.uk/news/wor...ders-US-strikes-in-Syria-to-destroy-Isil.html

Yemeni Houthi anti-government rebels relax behind a barricade as they guard a street near the entrance to the airport during clashes between government forces and rebels in Sanaa on September 20, 2014.

At least 47 people were killed, including four children, when a suicide bomber detonated a belt packed with explosives at a Houthi checkpoint in the center of the capital Sanaa where Houthi supporters were preparing to hold a rally.

Body parts were scattered across Tahrir Square and pools of blood formed on the asphalt after the blast, which also wounded at least 75 people.

In another attack in southeastern Yemen, a suspected Al-Qaeda suicide bomber killed 20 soldiers at an army checkpoint, the military said, revising an earlier toll of 10 dead. 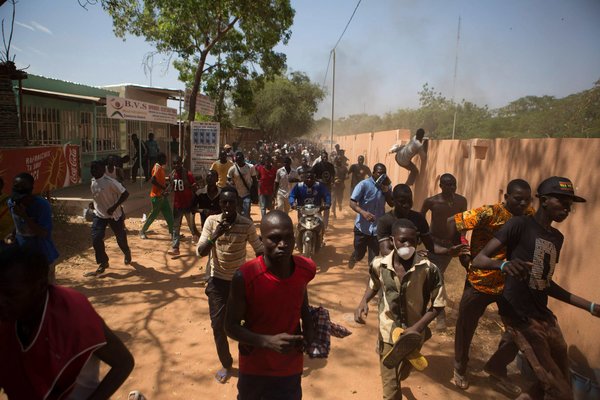 1. Gold mining has increased greatly since the mid-1980s and, along with cotton, is a leading export money earner.”
“In 2011, it became the 4th largest producer of gold in Africa.”
(http://www.mining.com/burkina-faso-27673/
http://www.nortonrosefulbright.com/knowledge/publications/62033/burkina-faso-under-gold-rush) 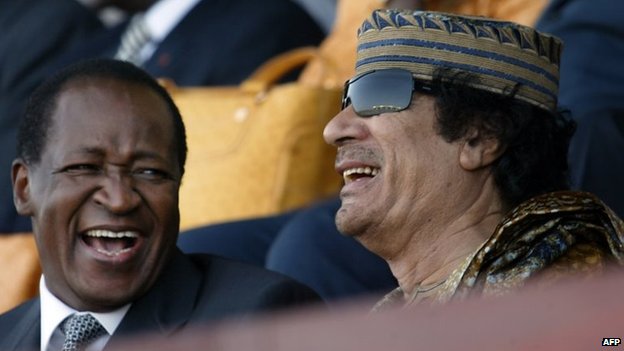 It was a time when the Libyan leader is said to have become bound to repressive regimes and armed movements worldwide.

Flush with oil money, Gaddafi orchestrated a training campaign for students who became brutal warlords in Africa, a legacy which leaves the region unstable today, according to Douglas Farah, senior fellow at the International Assessment And Strategy Center in Virginia, US.

The national security consultant and analyst says: ‘Gaddafi’s World Revolutionary Center (WRC) near Benghazi, Libya, became, as scholar Stephen Ellis noted in his 2001 book, The Mask Of Anarchy, the “Harvard and Yale of a whole generation of African revolutionaries”, many of them the continent’s most notorious tyrants.’

‘Courses lasted from a few weeks to more than a year, depending on the level of specialisation and rank one had,’ says Farah.

‘In addition to the African contingents, Gaddafi’s cells trained the Sandinistas from Nicaragua, along with other Latin American revolutionary movements and, in the process, built an enduring relationship with Daniel Ortega of Nicaragua and Venezuela’s Hugo Chávez.

Gaddafi, Ortega and Chávez also developed close ties with the Revolutionary Armed Forces of Colombia (Farc), a terrorist group reportedly producing more than half of the world’s cocaine.’

At the WRC in the 1980s and 1990s, a select group of students formed a fraternity who provided mutual support in their ruthless campaigns for power.

‘That network still wields considerable influence today through its alumni still in power, including Blaise Compaoré of Burkina Faso and Idriss Déby of Chad,’ says Farah.

‘His closest ally in Africa was Robert Mugabe , who although not a WRC product, has been propped up by Libyan donations and subsidised oil shipments.

Gaddafi also intervened militarily in the Central African Republic in 2001.

The president he protected, Ange-Félix Patassé, signed a deal giving Libya a 99-year lease to exploit all of the country’s natural resources, including uranium, copper, diamonds and oil.’

Farah, a former West Africa bureau chief for The Washington Post, adds: ‘Liberia, a US stronghold in the Cold War, was also targeted after a US bombing attack in 1986 against Libya killed one of Gaddafi’s adopted daughters.

‘Gaddafi recruited Liberia’s Charles Taylor, who is now standing trial for crimes against humanity, including the abduction of children for combat, systematic rape and mass murder.

‘Another recruit, Foday Sankoh of Sierra Leone’s Revolutionary United Front (RUF), would be standing trial in the same court for similar crimes had he not died of natural causes.’

Sankoh formed the RUF under Taylor’s auspices and together they pioneered their signature atrocity in the 1990s.

‘The amputation of the arms and legs of men, women, and children as part of a scorched-earth campaign was designed to take over the region’s rich diamond fields and was backed by Gaddafi, who routinely reviewed their progress and supplied weapons,’ says Farah.

Compaoré, the current president of Burkina Faso, is another WRC graduate.

In 1987, troops loyal to him assassinated his best friend, president Thomas Sankara, to pave the way for him to take power.

Compaoré sent troops and resources to back both Taylor’s insurgency in Liberia and the RUF in Sierra Leone.

A 2002 United Nations investigation found Compaoré played a significant role in arming them in violation of a UN arms embargo.

Returning to Latin America, Gaddafi has supported Ortega since 1979, a favour not forgotten by the Nicaraguan president who recently called Gaddafi his ‘brother’ and last week conveyed his support, promising: ‘Nicaragua, my government the Sandinista National Liberation Front and our people are with you in these battles.’

The Libyan relationship with Chávez in Venezuela and Farc in Colombia dates back to at least 2000.

A series of email exchanges between Farc commander Raúl Reyes, Gaddafi and Ortega was revealed by the Colombian police after Reyes was killed in 2008.

On September 4, 2000, a letter from the Farc high command to ‘Comrade Colonel Gaddafi, Great Leader of the World Mathaba’ thanked Gaddafi for hosting senior Farc commanders in Libya. Farc went on to request ‘a loan of $100million, repayable in five years…

‘One of our primary needs is the purchase of surface-to-air missiles to repel and shoot down the combat aircraft.’

The aircraft in question were supplied to the Colombian military by the US.

Chávez pulled out all the stops during Gaddafi’s visit to Venezuela in 2009.

‘What Simón Bolívar is to the Venezuelan people, Gaddafi is to the Libyan people,’ he said.

Gaddafi in turn praised Chávez, saying: ‘We share the same destiny, the same battle in the same trench against a common enemy, and we will conquer.’

Whether Gaddafi will do that remains to be seen but no one can accuse him of going down without a fight.