Is Queen Letizia dressing inappropriately on her official duties? Spanish monarch sparks debate with her short dress... and it's not the first time
The 43-year-old mother-of-two is experimental with fashion

She favoured dowdy suits and frumpy jackets in her years as a news reader, but since joining the Spanish monarchy, Queen Letizia's wardrobe has had quite the makeover.

The 43-year-old mother-of-two's collection of tailored sheath dresses, sky-scraping court shoes and eye-catching jewels is much more daring than the play-it-safe style of the former Kate Middleton.

Some royal critics have, however, been quick to note that her style has raised a few eyebrows during her year on the throne. 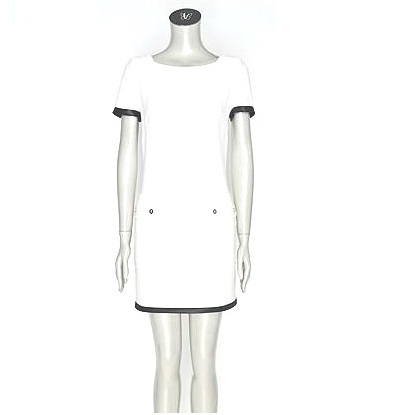 Queen Letizia of Spain displayed her thin legs on Tuesday as she attended the Luis Carandell Journalism Award at the Senado Palace in Madrid, Spain, in a short white dress

Indeed, as Royalista notes: 'Queen Letizia is quite conservative in her choice of clothing, but once in a while she raises a few eyebrows by wearing short dresses - way too short if you ask some royal followers.'

The website points to the monarch's ensemble for a visit to the Senado Palace on Tuesday.Felipe Varela

Not available online, check out the designer here

Her hemlines might be a little shorter than the typical traditional queen, but Queen Letizia has put a royally innovative stamp on the new era’s outlook on fashion.

The svelte beauty looked impossibly stylish in her cream vintage-style pocket shift dress on a recent outing which she effortlessly styled with a black cocoon coat and some elegant heels.

The monochrome dress is a recycled number by Queen Letizia’s favourite designer, Felipe Varela, which dates back to 2011. And thanks to its timeless Chanel-esque design, it will never go out of style – so she shouldn’t have to worry about recycling it in ten years’ time.

The unfortunate news is that the dress is no longer available to buy online, so get clicking to the right to check out Felipe Varela’s current collection or check out the alternatives below to emulate Queen Letizia’s look from the web.
E