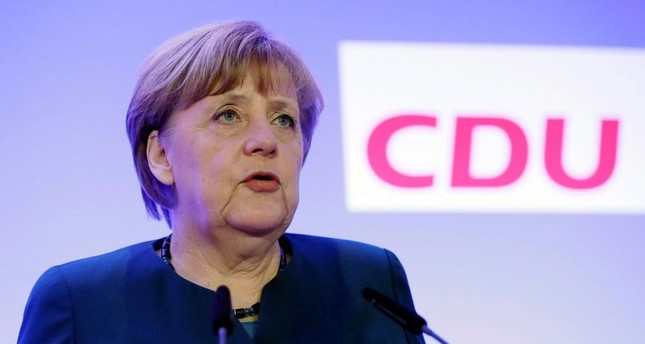 German Chancellor Angela Merkel, Federal Chairman of the party CDU.
The German government is striving to censor 'fake news' on large social media sites and the European Union is likely looking for similar, pan-European measures
Recently in Germany, a democratic nation that often takes pride in its social freedoms, the Merkel's coalition government decided to censor what corporate censorship bureaus will consider to be "fake news."

The action seems to be widely supported across the German coalition government between the Christian Democratic Union (CDU) and the Social Democratic Party of Germany (SDP). Parliamentary Chairman of the SDP Thomas Oppermann said in an interview with Der Spiegel, "Market dominating platforms like Facebook will be legally required to build a legal protection office in Germany that is available 24 hours a day, 365 days a year."

"If, after appropriate examination, Facebook does not delete the offending message within 24 hours, it should expect individual fines of up to 500,000 euros."

The CDU's Volker Kauder has further said, "There has been mere talk for too long. Now we in the coalition will take action at the beginning of next year."

In a similar statement, Facebook has said it takes the issues raised "very seriously, and we are engaging with key politicians and digital experts from all parties and relevant ministries interested in this matter. Our announcement last week underlines our efforts to improve our systems. We have announced several new functions that address the issue of fake news and hoaxes."

Germany already has several laws prohibiting what German law deems to be "offensive speech" or "hate speech" and "defamation." German citizens have been prosecuted for things they have posted on Facebook and Twitter. Even people simply commenting on the immigration issue of the past two years have not been spared from prosecution. Now the big companies will in essence establish special teams to go presumably through everything that is posted and delete what they and the German government deem to be "fake news."

Germany's Justice Minister Heiko Maas has said, "Defamation and malicious gossip are not covered under freedom of speech," and "Justice authorities must prosecute such things, even on the internet." He went on to say people could even go to jail for such acts.

However, as mentioned earlier, people have been prosecuted for criticizing the government's immigration policies.

Germany is headed for elections this year and they could have probably not come at a worse time for the current coalition. The immigration issue and the terror attacks that have struck German land have generated a lot of controversy and Chancellor Angela Merkel's popularity has been decreasing for months now.

Hillary Clinton has been blaming what she described as "fake news" in November for her loss in the presidential race against Donald Trump. Even before the election during the debates, she ran a "fact-checking" website in order for people to get the "real facts" and "fact-check Donald Trump" in real time during the last two debates. The initiative, however, was widely mocked online for its flaws.

Trump's victory could probably, in part, be attributed to his and his supporters' attitude towards the internet and the ability to communicate online without seeming out of place. It is possible that Merkel is afraid something similar will happen to her. Eurosceptic Frauke Petry's Alternative for Germany (AfD), populist party has been gathering a lot of support over the past few months as Merkel's popularity has declined. It is unlikely that the AfD can do anything on its own, or even a coalition, by the time the elections happen in the fall (or late summer) of 2017, however the CSU could lose votes to them as the far-right National Democratic Party of Germany (NDP) has done.

European Union members of European Parliament and other figures have been calling for such measures to be taken as well. Martin Schultz in particular has praised the act and has called for a pan-EU implementation of a similar measure.

Opening the Borders Was Against German Law — And it Was Planned in Advance
Posted on January 16, 2017 by Baron Bodissey


Thorsten Schulte is a German economist and financial expert who runs a website known as Silberjunge (Silverboy).

In the following exposé of Chancellor Angela Merkel’s machinations during (and before) the “refugee” crisis, Silberjunge focuses on two major points:

1. The chancellor’s opening of the borders to uncontrolled migration without a directive from the Interior Ministry was a clear violation of German law.
2. The entire migration wave should not even be called a “crisis”, since it was planned in advance.

Mr. Schulte provides ample documentation for his assertions. The links are shown in the video, and may be found on his website.

One of the most prominent German cultural traits is a deep-seated respect for the law and an insistence on obeying the rules. It’s a characteristic that has its negative aspects (“I was only following orders”), but it can also be a positive force for cultural reform and regeneration.

According to Silberjunge, all the politicians in Berlin are well aware of the facts he presents in his video, but are afraid to discuss them in public. His presentation is an appeal to them to break the wall of silence and expose the chancellor’s manifold derelictions of duty in such a way that ordinary German citizens can see them.

If the German people ever become aware of the lawless outrages that have been perpetrated against them — and that’s a big “if” — it may cause such a widespread popular revulsion that the current politically correct/multicultural establishment will be overthrown.

Many thanks to Nash Montana for the translation, and to Vlad Tepes for the subtitling:

This entry was posted in Civil Liberties, Domestic terrorism, Enrichment, Europe, Immigration, Legal action, News, PC/MC, Politics by Baron Bodissey. Bookmark the permalink.
13 THOUGHTS ON “DER SILBERJUNGE: OPENING THE BORDERS WAS AGAINST GERMAN LAW — AND IT WAS PLANNED IN ADVANCE”
W