"We are the richest continent. We can do more" - President Schulz on migration at the European Council

"Lampedusa has become a symbol of a European migration policy," EP president Martin Schulz told EU leaders at the start of the October European Council held in Brussels. "It should also become a turning point for that migration policy", he added, calling for greater support of the Mediterranean countries, which receive most irregular migrants trying to enter the Union, and greater cooperation, solidarity and flexibility overall.

Martin Schulz — “Democracy in Europe needs to be defended”

Former President of the European Parliament Martin Schulz, now the candidate of the centre-left SPD in Germany to be Federal Chancellor, has been accused of massive corruption and cronyism by German weekly Der Spiegel.

In an article in todays Spiegel, Mr Schulz is accused of abusing the system during his five years as European Parliament President by ensuring fraudulent payments to his press adviser, Markus Engels, now Schulz’ campaign manager in this year’s German federal elections. 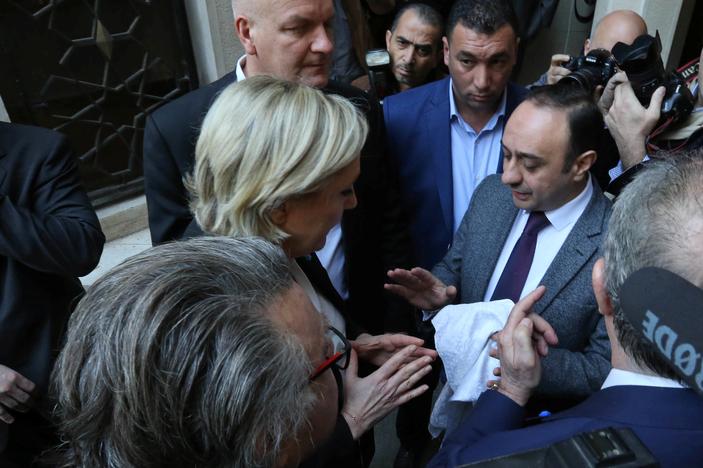 Le Pen, among the frontrunners for the presidency, is using a two-day visit to Lebanon to bolster her foreign policy credentials nine weeks from the April 23 first round, and may be partly targeting potential Franco-Lebanese votes.

After meeting Christian President Michel Aoun - her first public handshake with a head of state - and Sunni Prime Minister Saad al-Hariri on Monday, she had been scheduled to meet the Grand Mufti Sheikh Abdul Latif Derian

He heads the Dar al-Fatwa, the top religious authority for Sunni Muslims in the multireligious country.

"I met the grand mufti of Al-Azhar," she told reporters, referring to a visit in 2015 to Cairo's 1,000-year-old center of Islamic learning. "The highest Sunni authority didn't have this requirement, but it doesn't matter.

"You can pass on my respects to the grand mufti, but I will not cover myself up," she said.

The cleric's press office said Le Pen's aides had been informed beforehand that a headscarf was required for the meeting and had been "surprised by her refusal".

But it was no surprise in the French political context.

French law bans headscarves in the public service and for high school pupils, in the name of church-state separation and equal rights for women. Le Pen wants to extend this ban to all public places, a measure that would affect Muslims most of all.

Buoyed by the election of President Donald Trump in the United States and by Britain's vote to leave the European Union, Le Pen's anti-immigration, anti-EU National Front (FN) hopes for similar populist momentum in France.

Like Trump, she has said radical Islamism must be faced head on, although she has toned down her party's rhetoric to attract more mainstream support and possibly even woo some Muslim voters disillusioned with France's traditional parties.

After meeting Hariri on Monday, Le Pen went against current French policy in Syria by describing President Bashar al-Assad as the "only viable solution" for preventing Islamic State from taking power in Syria.

Lebanon has some 1.5 million Syrian refugees.

"I explained clearly that ... Bashar al-Assad was obviously today a much more reassuring solution for France than Islamic State would be if it came to power in Syria," she told reporters.

Hariri, whose family has close links to conservative former French President Jacques Chirac and still has a home in France, issued a strongly-worded statement after their meeting.

"The most serious error would be to link Islam and Muslims on the one hand and terrorism on the other," Hariri said.

"The Lebanese and Arabs, like most of the world, considers that France is the home of human rights and the republican state makes no distinction between citizens on ethnic, religious or class grounds."


As many French women as men now back the Front National’s Marine le Pen—a development which has boosted her chances of winning the all-important expected second round of voting, scheduled for May 7, especially if her opponent is anyone from the far left.

In the 2012 presidential election, Le Pen won 17 percent of female voters, compared with 20 percent of men. Now, according to a new poll from Ifop, she is attracting 26 percent of voters of both sexes, making her the most favored candidate among women for the first round.

The poll revealed that the Front National leader has already gained at least two million additional female voters, and her latest election video shows that she is aiming to attract more, leading far leftist sociology professor and professional “anti-racism” activist Nonna Meyer to tell Bloomberg news that “women are the key. These women often abstain and now they are backing Le Pen to protect their jobs and their security. This is not a feminist vote.”

Apparently, Bloomberg revealed, while women make up just over half of the electorate in France they are far less likely to turn out than men, “offering a well of untapped support for the candidate who manages to tune into their concerns.”

At the beginning of February, the Le Pen campaign began distributing millions of copies of a brochure that set out her plan to “defend French women” as the country’s first female president.

The pamphlet was interspersed with pictures of her navigating “the world of men” as a sister, mother, lawyer, sailor, and political leader and included a promise to be a shield against Islamic fundamentalists who, she said, want to stop women “wearing a skirt, going to work, or to the bistro.”

READ 1000s of Invaders “Vanishing”
According to the latest polls—and as far as they can be trusted—Le Pen stands to get around 28 percent of the vote in the first round on April 23. This will translate to well over 10 million votes.

If, as is expected, the vote goes to a second round—on May 7—she needs in theory about another 8 million votes to win.

The latest poll predicted the conservative Fillon at 20 percent and the far left’s Emmanuel Macron—who is running for his own party, En Marche! (“Forward”)—at 18.5 percent.

Another two far left candidates, the Socialist Party’s Benoît Hamon and the La France insoumise (“Unsubmissive France”) candidate Jean-Luc Mélenchon, will each poll about 13 percent of the vote in the first round, according to the polls.

In theory, the far left and the conservatives always join together against the FN in the second round, but this time there are a number of factors which could possibly alter this outcome—with the primary one being if the two far left candidates can strike an alliance before the first round—a logical step because together their vote totals are nearly on a par with Le Pen’s.

Reuters quoted a research memo from Bruno Cavalier, chief economist at Oddo Securities in Paris, as saying that Le Pen does indeed “have a chance” if she faces Fillon or Hamon in the run-off.


In that scenario, according to the memo, turnout may be depressed and Le Pen “could win with as few as 14 million votes,” Cavalier said, although he gave “her just an 11 percent chance of victory.”

READ Khan Campaigned in Hebrew
Reuters added that bookmakers rate Le Pen’s chances much higher at 34 percent, and the pollster Elabe showed the FN leader exceeding 40 percent in the run-off against either Fillon or the independent Emmanuel Macron for the first time.

If that poll is accurate, then Marine Le Pen might be closer to the Élysée Palace than one may think.

* Earlier this week, during a visit to Beirut, Le Pen refused to wear a head scarf to meet with a senior Muslim official, who insisted she don one. With neither side backing down, she left without seeing him.
OP
E


Dutch populist politician Geert Wilders—currently the front-runner in opinion polls in the Netherlands March 2017 general election—has announced a hardline anti-Third World invasion election platform which includes “zero asylum,” the de-Islamizing of the Netherlands,” the revoking of all “asylum” grants, the banning of all immigration from Muslim nations, and withdrawing from the European Union.

The election platform, published on the website of his Freedom Party (PVV) website, says that Wilders will close Holland’s borders, revoke all existing “asylum” residence permits, close all invader centers, ban Islamic head veils, denaturalize all criminal invaders with dual nationality, refuse to let ISIS supporters who had fought in Syria back into the country, close all mosques and Islamic schools, leave the E.U., institute a system of binding citizens’ referenda, cancel all public funding for “foreign aid,” and lower taxation as state expenditure drops.

The hardline policy has provoked a storm of protest from all the other parties in the Netherlands, who have called for a “cordon sanitaire” around the PVV to try and prevent it from taking part in a coalition government.

The Dutch parliament is elected by a proportional representation system, and is always highly fractured. Generally, though, any party which gains more than 30 of the 150 parliamentary seats forms the government in coalition with its closest ideological neighbors.

Currently, opinion polls say that Wilders’s PVV is on course to emerge from the election with around 30 seats, and is set to become the single largest party in the new parliament.

During a recent television interview with Dutch broadcaster WNL, Wilders predicted a government role for the PVV in spite of all other parties vowing not to work with him.

READ Invader Gang Wars “30 Mins” from Capitol
Wilders said that all the other parties would “soon forget” their pledges not to work with him. “In the first place, they’ll have to [abandon their pledges],” he said. “You can’t just shove two and a half million people aside after democratic elections, that would be very ill-advised.”

On Twitter, Wilders added that there would be a non-violent “revolt” if the PVV was sidelined, and pointed out that an alternative left-right coalition would have to encompass five or more parties.

“This will prove unworkable, and that kind of coalition would be so unstable that not only will it not serve the country, but it will be lying on its ass within a year, to put it crudely,” Wilders said.

During the interview, Wilders was asked about his unusually brief manifesto, and said that he was “not going to promise voters anything apart from this: We will make the Netherlands ours again; we will close the borders.”

In addition, he said, “all that money we send abroad—to Africa, to Brussels, to Greece, to asylum seekers in the Netherlands”—will go to the Dutch people instead. Finally, he told the shell-shocked interviewer, that the Netherlands does not need to build a Trump-style wall to keep out foreigners but merely has to re-establish border controls.

A new campaign video issued by the PVV highlighted his new campaign slogan: “The Netherlands is ours again,” and referenced both Brexit and Donald Trump’s election victory in America as examples to be followed.

“How long are we still going to be in charge in our own country?” Wilders asks in the video.

READ Afghanistan: The War of Fools
“The [immigration] sluices are wide open. We have to close our borders. Before the end of this century, Africa’s population is going to increase from one to four billion people, and many of them want to come here.

“Only if you go to the polling booth and vote, can the Netherlands be ours once again.”