Even plutocrats can see profound inequality isn’t in their interests
As the smartest of the super-rich now understand, income inequality must be addressed before it tears societies apart 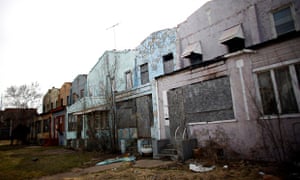 Gary in Indiana, home to the Gary Works steel mill, which once employed 30,000 workers and now employs 5,000. Photograph: Eric Thayer/Reuters

Not so long ago, inequality was a dirty word. The experience of my friend Branko Milanovic, the world’s foremost expert on global income inequality, was typical. “I was once told by the head of a prestigious thinktank in Washington DC that the thinktank’s board was unlikely to fund any work that had income or wealth inequality in its title,” Milanovic recalled in his 2011 book on the subject.

These were the days when Mitt Romney said discussions of income inequality should be conducted only in quiet rooms and when an American private equity tycoon compared an effort to raise taxes on his industry to Hitler’s invasion of Poland. To mention the increasing concentration of wealth at the very top was to court accusations of class envy – indeed, in his 2011 book, even Bill Clinton admonished Barack Obama for his tone in talking to and about America’s super-rich. After my book, Plutocrats, was published in 2012, I was even – and I know this will shock you – disinvited to a Davos dinner party!

Just three years later, inequality hasn’t merely become a subject fit for polite company, it has become de rigueur. It was a central preoccupation at a conference on inclusive capitalism at the Mansion House and Guildhall last May. The event was organised by Lady Lynn de Rothschild and the opening speaker was Prince Charles. And at Davos, income inequality has gone from taboo to top of the agenda.

There’s a good reason for this pivot. Rising inequality is becoming so pronounced it is impossible to ignore. The latest jaw-dropping statistic is Oxfam’s calculation that by next year, the top 1% will own more of the world’s wealth than the bottom 99%. What is less apparent is how those of us who have been worried about income inequality for a long time should respond to the embrace of this issue by the plutocrats themselves.

It is easy to be sceptical. But we should welcome the plutocratic critique of plutocracy. Here’s why. Surging income inequality is a symptom of a broader transformation in how capitalism is working in the 21st century. This change has brought tremendous benefits – it has helped to lift hundreds of millions of people out of poverty in the emerging markets and provided cheaper goods and services, and many brand new ones, for us in the industrialised world. But it is also hollowing out the incomes and wealth of the western middle class, even as it enriches those at the very top.

This distributional shift is the great economic and political challenge of our time. It will tear some societies apart. The successful ones will be those that figure out how to solve it together.

The technology revolution, which has been turbo-charged by globalisation, is an economic upheaval comparable in its scale and scope to the Industrial Revolution. Just as the Industrial Revolution did not bring the end of farming, the technology revolution won’t bring the end of manufacturing. But just as the agricultural sector shrank as a share of the overall economy, particularly in terms of employment, the relative size of the industrial sector will decline, too.

Mike Moffatt, an economist at the Ivey School of Business in London, Ontario, likes to use the example of Gary Works, in Indiana, to illustrate what is going on. It was once the world’s largest steel mill and remains the largest integrated steel mill in North America. At its postwar peak, Gary Works employed 30,000 people and could produce 6m tons of steel a year. Today, Gary can produce more than 7m tons of steel working at full capacity, but it takes just 5,000 workers to do that.

The same forces that have transformed Gary Works are changing every sphere of human activity. This isn’t just about the assembly line any more – 99% of us are, metaphorically, Gary steel workers.

The lucky 0.1% own a Gary Works or have invented the technologies that transformed them, and the rest of the top 1% work for them. Until now, these winners in our winner-take-all economy have backed a set of political measures – weaker unions, deregulation, lower taxes – which have exacerbated the distributional impact of the new economy.

As even Davos Man has realised, that is not sustainable. The weak economic growth that much of the western industrialised world is currently experiencing suggests that an economic system that hollows out the middle class will struggle to grow. And the vicious political polarisation should make us worry that an economy that produces cheap goods but even cheaper jobs will ultimately erode mass democracy.

Some think a violent confrontation between the new economy’s winners and losers is inevitable. As Nick Hanauer, an American technology billionaire, warned last year: “If we don’t do something to fix the glaring inequities in this economy, the pitchforks are going to come for us.” He’s right. After all, the last time we negotiated a comparable political and economic transition – the Industrial Revolution – it took economic depression, two world wars and communist revolutions in Russia and China before we were able to establish a new, economically and politically sustainable status quo.

That is a very high cost indeed. Which is why the smartest plutocrats understand it is in their best interest to work to build a 21st-century version of inclusive capitalism. For our own sakes, we should give them a chance to join the rest of us in figuring that out.

Chrystia Freeland, ex-deputy editor of the FT, is a Liberal MP in the Canadian parliament and author of Plutocrats (2012)
O

Successful societies such as the Nordic ones figured out how to solve income inequality ages ago. Solving global income inequality is an alltogether different game. But guess what, Ms Freeland? The smartest plutocrats have already figured how to: let's redistribute everybody elses money except our money because we are the masters of the universe. It's a no-brainer. They don't need our help, see?