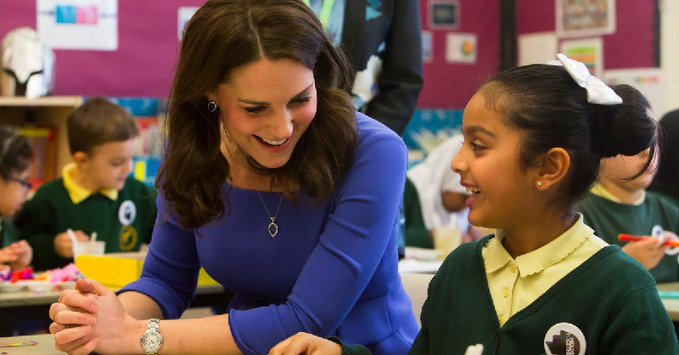 The Duchess of Cambridge’s Mentally Healthy Schools initiative has become UK-wide! The Anna Freud National Centre for Children and Families revealed the major milestone today to correspond with the majority of children returning to school. The initiative provides a whole-school approach, including resources, curriculums and tools to help develop a positive ethos and culture – where everyone feels that they belong.

The Duchess of Cambridge, who is patron of the prestigious charity, launched Mentally Healthy Schools in 2018, in the hope to support children struggling with their mental wellbeing in school. At the time, she pledged: “The ultimate goal is that no primary school teacher, anywhere in the country, should in future have to wonder where to turn when it comes to the wellbeing of children in their care.”

That goal she, alongside The Royal Foundation’s Heads Together campaign, aimed for has been reached, and due to the impressive success across schools in England; The Anna Freud Centre have now distributed the coveted resources across Scotland, Wales and Northern Ireland.

The resources have provided a lifeline in educating teachers and parents on how best to tackle mental health issues faced by their children. “It’s been life-changing, especially for the children,” says one teacher from Colton Primary School in Leeds, who have been using the Mentally Healthy Schools initiative for 6 months. “Their personal and social development has been extraordinary, and the overall feeling within the classroom is much more enjoyable, both for teacher and student.”

There was also praise for the Duchess herself. “To hear how involved she’s been with the resourcing and the overall set-up is amazing. We love Kate, and her commitment to children and parents is really needed, now more than ever.”

Catherine has made children’s mental health her main focus throughout her time as a member of The Royal Family and has consistently pulled together the top experts in the field to work together to provide the best care possible. Her dedication has led many experts to describe her as “the most important public figure in mental health today”.

Since first spearheading the Heads Together campaign – the idea long being hers – the Duchess’ work has seen an exponential rise in conversations over mental health. Research conducted by the charity Mentally Together saw the Duchess of Cambridge listed as the biggest international influence when it comes to discussing mental health. 44% of those asked picked the royal as their top choice, followed by Prince William with 30%, citing his moving documentary over men’s mental health as a factor. Lady Gaga came in 3rd with 24%, with Ross Edgely – a British extreme explorer – coming in 4th with 15%.

The same research also found that overall conversations on child mental health has increased by 48% - the UK’s biggest ever increase – with the overall response feeling that the Duchess of Cambridge’s involvement in the field has had huge benefits in parents feeling heard.

The Duchess is showing no signs of slowing down anytime soon. The long-anticipated results from her 5 Big Questions survey is expected to be released in due course, after facing a push back due to the pandemic. The results will help plan the trajectory for her future work, both in and out of mental health. Whatever they reveal, it is almost certain that Catherine’s impact on mental health will continue to inspire change.

Welcome to The Rumble Online, featuring all the latest Opinions, Movies, Travel, Tech, Books and so much more!
therumbleonline.com
M

Mihrimah dijo:
Research conducted by the charity Mentally Together saw the Duchess of Cambridge listed as the biggest international influence when it comes to discussing mental health. 44% of those asked picked the royal as their top choice, followed by Prince William with 30%, citing his moving documentary over men’s mental health as a factor.
Hacer clic para expandir...