Gyalsey is born
Bhutan receives gift most precious
Prince first presented to His Majesty the Fourth Druk Gyalpo
Her Majesty The Gyaltsuen gave birth to the first Royal Child yesterday, February 5, 2016.
His Royal Highness was delivered safely at the Lingkana Palace in Thimphu.
News release from the Royal Office of Media stated that with the blessings of the guardian deities of Bhutan and protectors of the dharma and the prayers of the Bhutanese people, Her Majesty and His Royal Highness The Gyalsey are both in perfect health.
“His Majesty The King was at Her Majesty’s side during the time of the delivery. Following the Royal birth, the Prince was first presented to His Majesty the Fourth Druk Gyalpo.”
All sacred Bhutanese traditions were observed for the auspicious occasion with His Holiness the Je Khenpo presiding over the religious ceremonies.
“Their Majesties and members of the Royal family are filled with profound joy on the birth of His Royal Highness,” the news release stated.
Their Majesties expressed appreciation to the Bhutanese medical team for their excellent service.
Their Majesties also expressed their heartfelt gratitude to the members of Zhung Dratshang, Rabdeys, and other religious organizations for conducting prayer ceremonies in all the dzongs and lhakhangs across the country for the wellbeing of His Royal Highness, Their Majesties, and the people of Bhutan.
Announcing the birth of The Gyalsey to the nation, Lyonchoen Tshering Tobgay, said that it is the good fortune of the people of Bhutan that on this auspicious day His Royal Highness The Gyalsey is born, fulfilling the wishes and the prayers of the people.

“We welcome the news with great joy and happiness. The day calls for a great celebration throughout the country,” Lyonchoen said.
However, Lyonchoen reminded that His Majesty The King has commanded that celebration be kept small considering the economy of the country. “Therefore, the government has decided to declare Monday a national holiday to celebrate the joyous occasion so that the people may offer their prayers and good wishes.”
Lyonchoen Tshering Tobgay also announced that coinciding with the birth of The Gyalsey and as a part of the celebrations, His Majesty The King has commanded the government to initiate the rebuilding of the Drugyal Dzong in Paro.
“Drugyal Dzong will be restored to its original grandeur to also observe the birth anniversary of Guru Rinpoche and 400 years Zhabdrung Ngawang Namgyel’s arrival in Bhutan,” he said.
“Initiative to rebuild the dzong to its former glory has special significance because Zhabdrung built the dzong in 1649 to celebrate Bhutan’s victory against adversaries from abroad,” Lyonchoen said. “Rebuilding Drugyal Dzong will be one of the most important projects of the government. Thus, the Salang-Tendrel ceremony for the construction will be conducted today coinciding with the birth of HRH The Gyalsey.”
Lyonchoen Tshering Tobgay, on behalf of the people of Bhutan, thanked Their Majesties for bestowing the people with the most precious gift and offered prayers and Tashi Delek to His Majesty The King and H
H 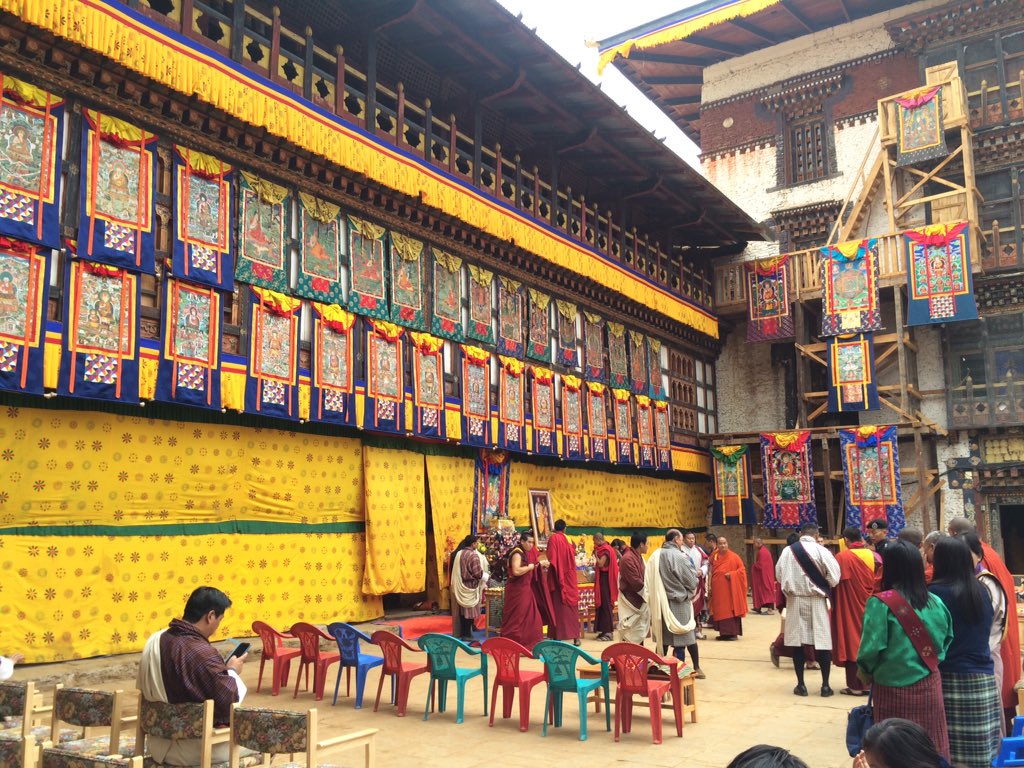 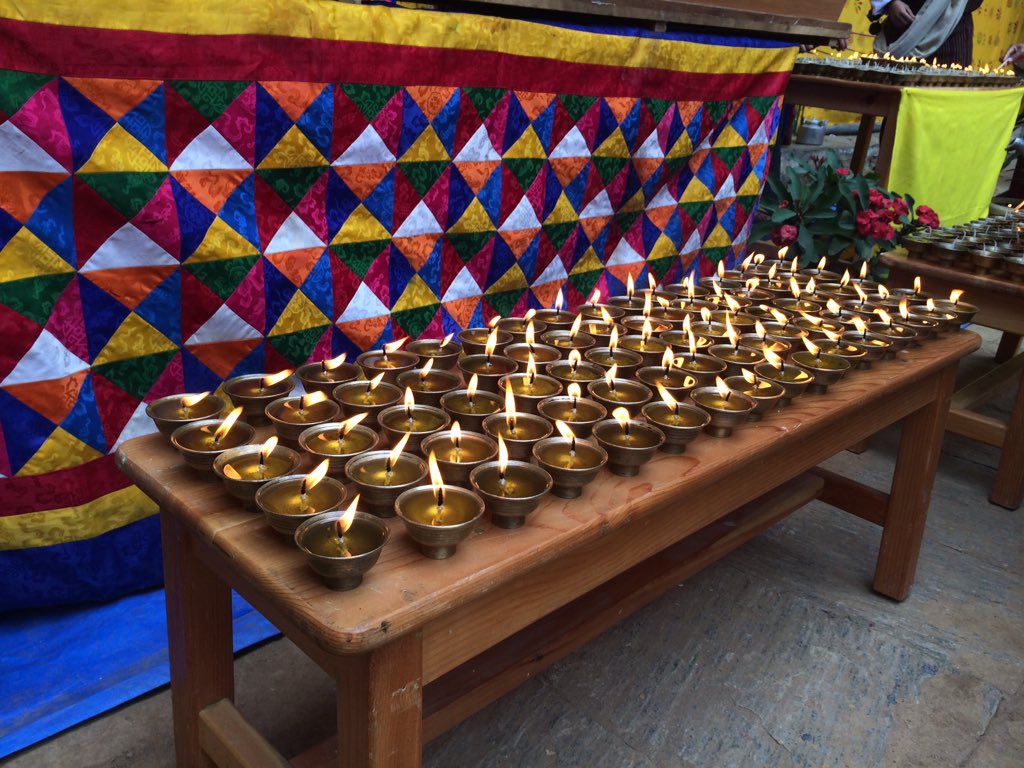 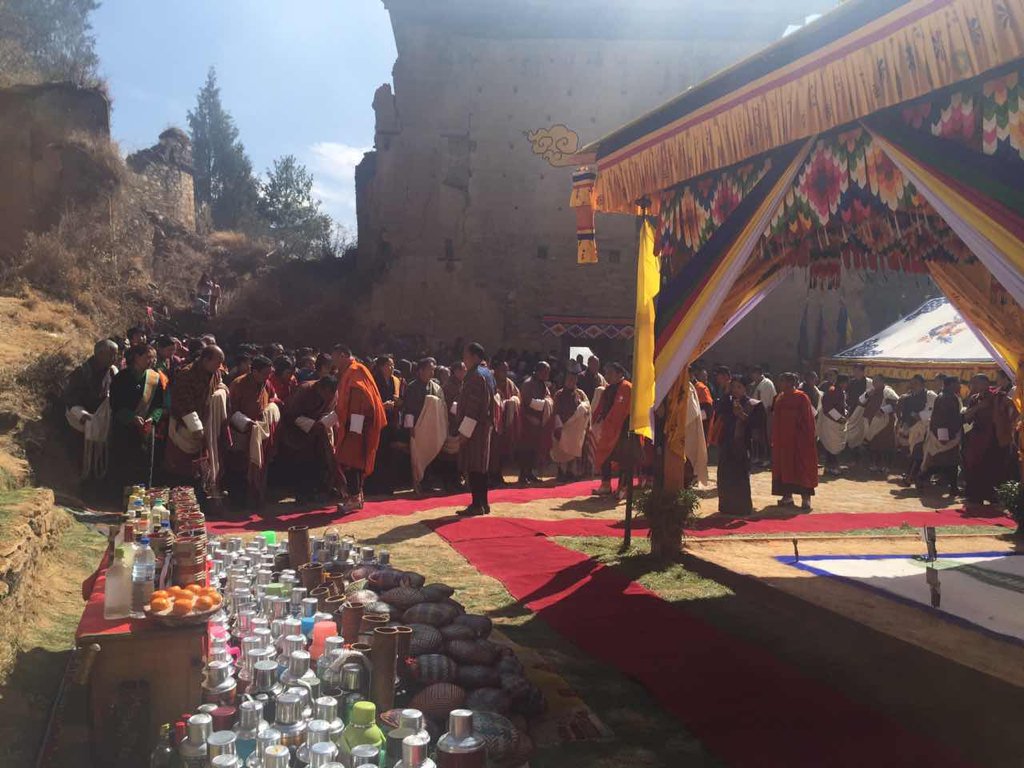 Bhutanese people across the country were greeted with ecstatic news today morning when many learnt of the birth of the Prince, The Gyalsey at 11:55 pm yesterday night. 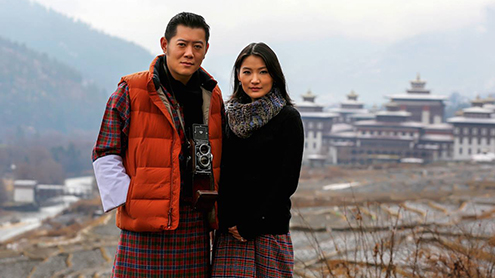 A press release from the Royal Office of Media announced that, “His Royal Highness The Gyalsey, the First Child of Their Majesties has been born.”

His Royal Highness was born in Lingkana Palace in Thimphu. His Majesty The King was at Her Majesty’s side at the time of the Royal Birth. “Their Majesties and members of the Royal family are filled with profound joy,” the release adds.

The newborn prince was first presented to His Majesty The Fourth Druk Gyalpo.

Meanwhile, His Holiness the Je Khenpo presided over the religious ceremonies and sacred Bhutanese traditions that were observed across the country during the occasion.

His Holiness the Je Khenpo said, the Royal Birth is a moment of profound happiness for the people of Bhutan.

Soon after, Prime Minister Tshering Tobgay appeared on the National TV and announced Monday a holiday across Bhutan to celebrate the Royal Birth. Besides several other significant programmes, two saplings of the Bodhi tree from Sri Lanka and Bodhgaya and 108 trees, each of five different species with sacred significance, are being planted at selected locations to mark the day of the Royal Birth.

At the same time, the Hindu communities in the southern dzongkhags offered prayers at the Samtse Mandir.

Tendrel Album
Produce a Tendrel Album containing wishes and prayers for the newborn Prince from Bhutanese of all walks of life.