Al loro dijo:
.
A Tiny Microchip Was The Likely
Motive For Pentagon Hijack Of MH370

By Yoichi Shimatsu
Exclusive To Rense.com
3-25-14

(Yoichi Shimatsu is a Hong Kong-based science writer, former editor of The Japan Times Weekly and a founding faculty member of journalism schools in Hong Kong and Beijing)

++++++++++++++++++++++++
http://www.express.co.uk/news/world...-ELECTRONIC-WARFARE-and-radar-defence-company
Malaysian plane: 20 passengers worked for ELECTRONIC WARFARE and MILITARY RADAR firm
A US technology company which had 20 senior staff on board Malaysia Airlines Flight MH370 had just launched a new electronic warfare gadget for military radar systems in the days before the Boeing 777 went missing.

Freescale Semiconductor, which makes powerful microchips for industries including defence, released the powerful new products to the American market on March 3.
Five days later, Flight MH370 took off from Kuala Lumpur for Beijing with 239 people on board including 20 working for Freescale.
Twelve were from Malaysia, while eight were Chinese nationals.
Freescale’s spokesman Mitch Haws has said: “These were all people with a lot of experience and technical background and they were very important people.
“It’s definitely a loss for the company.”
Freescale’s shareholders include the Carlyle Group of private equity investors whose past advisers have included ex-US president George Bush Sr and former British Prime Minister John Major.
Carlyle’s previous heavyweight clients include the Saudi Binladin Group, the construction firm owned by the family of Osama bin Laden.
The fact that Freescale had so many highly qualified staff on board the Boeing 777 had already prompted wild conspiracy theories about what might have happened.
he company says they were flying to China to improve its consumer products operations, but Freescale’s fresh links to electronic warfare technology is likely to trigger more speculation and deepen the mystery. 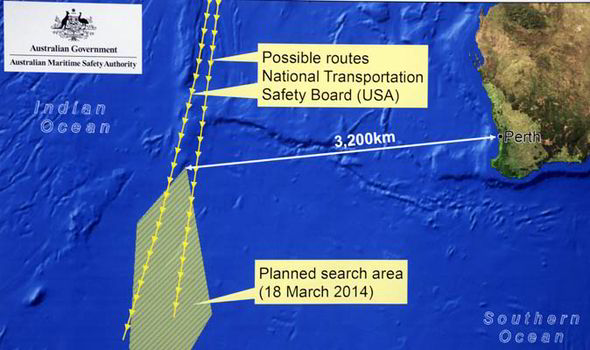 Experts have been baffled how a large passenger jet seems to have flown undetected and possibly beaten military radar systems for up to six hours.
Avoiding radar via “cloaking technology” has long been one of the objectives of the defence industry and Freescale has been active developing chips for military radar.
On its website, the company says its radio frequency products meet the requirements for applications in “avionics, radar, communications, missile guidance, electronic warfare and identification friend or foe”.
Last June it announced it was creating a team of specialists dedicated to producing “radio frequency power products” for the defence industry.
And on March 3, it announced it was releasing 11 of these new gadgets for use in “high frequency, VHF and low-band UHF radar and radio communications”.
The company did not respond to questions from Express Online, including whether any of its missing employees had been working on the defence products. 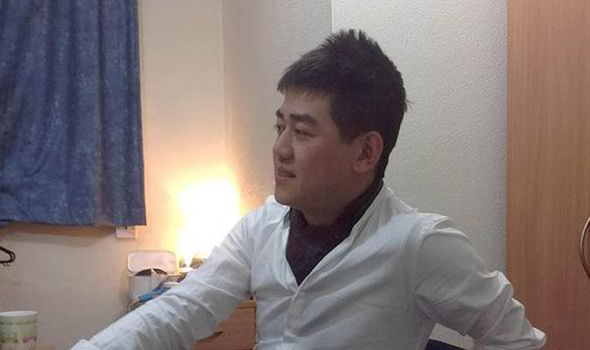 Hull University student Yue Wenchao, 26, who is reported to be one of the passengers on board [ENTERPRISE]
It neither provided any responses to the latest bizarre conspiracy theory being widely published on the comments sections of newspaper websites and other internet forums.
The comment reads: “It reads: “Have you pieced together the puzzle of missing flight 370 to Beijing China? If not, here are your missing pieces.
Patents Patents Patents.
“Four days after the missing flight MH370 a patent is approved by the Patent Office, four of the five Patent holders are Chinese employees of Freescale Semiconductor of Austin TX.
“Patent is divided up on 20 per cent increments to five holders.
“Peidong Wang, Suzhou, China, (20 per cent); Zhijun Chen, Suzhou, China, (20 per cent); Zhihong Cheng, Suzhou, China, (20 per cent); Li Ying, Suzhou, China, (20 per cent); Freescale Semiconductor (20 per cent).
“If a patent holder dies, then the remaining holders equally share the dividends of the deceased if not disputed in a will.
“If four of the five dies, then the remaining one Patent holder gets 100 per cent of the wealth of the patent.
“That remaining live Patent holder is Freescale Semiconductor.”
It adds: “Here is your motive for the missing Beijing plane. As all four Chinese members of the Patent were passengers on the missing plane.
“Patent holders can alter the proceeds legally by passing wealth to their heirs. “However, they cannot do so until the Patent is approved. So when the plane went missing, the patent had not been approved.”

@NajibRazak
Seguir
I am shocked by reports that an MH plane crashed. We are launching an immediate investigation.

@MAS
Seguir
Malaysia Airlines has lost contact of MH17 from Amsterdam. The last known position was over Ukrainian airspace. More details to follow.

@BoeingAirplanes
Seguir
Our thoughts and prayers are with those on board MH17, as well as their families and loved ones. We stand ready to provide assistance. A Boeing 777 Malaysian airlines crashed in Ukraine near the Russian border in the last few hours, Interfax is reporting, citing “a source in the aviation circles.”

“Boeing Malaysian airlines operate flights to Amsterdam — Kuala Lumpur for 50 miles before entering the airspace of Russia, began to decline, he was subsequently found burning on the ground in Ukraine,” the source said.

There were reportedly 295 passengers and 15 crew members were onboard.

Military expert Dmitry Tymchuk says the Malaysia Airlines plane crashed to the north of Torez in the Donetsk region, according to Ukrainian journalist Myroslava.

The area is partly controlled by pro-Russian separatists who are fighting the Ukrainian army. The adviser to the Ukraine Interior Minister says passenger plane was shot down by a ground-to-air missile.

On July 8, the State Aviation Administration of Ukraine closed the airspace to civilian aircraft after a military transport plane was shot down. On Thursday, Ukraine accused that a Russian fighter jet shot down a Ukrainian SU-25 fighter plane.

The aircraft reportedly had to cross the Russian border at about 9:30 EDT. Gracias @Grillo !, voy para allá.
You must log in or register to reply here.